This document is organized as follows.

Without further ado, let’s get started.

I draw the following figure to show MLIR’s workflow at a very high level.

Motivation from the Google MLIR Paper¶

This is a really nice Intro, pay close attention to how they lay out the storyline. If you are new to PL just like me, I strongly recommend going through the MLIR Toy Example (covered below ) for a better understanding, and then come back, read through this again.

This image shows that most high-level languages have their own AST and associated infrastructure for transforming etc. Though language-specific, these are modules doing similar things. MLIR is a general framework to facilitate the development of such language-specific modules. It allows developers to use a unified codebase/framework to do their optimizations and develop some common, shared optimizations for multiple inputs.

I recommend reading Toy Example Tutorial for a deep understanding.

This image is MLIR’s original motivation. They found that ML graphs have a lot of different compilers. The compilation process is fragmented and some compilers are not following the best practices.

While reading through its documentation, I’m starting to get a sense of what problem MLIR is trying to solve. The MLIR paper for sure describes the problem at a high level, but being able to read through the code example and its documentation helps a lot.

The following quote is the same motivation described in the MLIR paper.

Other compilers, like LLVM (see the Kaleidoscope tutorial), offer a fixed set of predefined types and (usually low-level / RISC-like) instructions.

It is up to the frontend for a given language to perform any language-specific type-checking, analysis, or transformation before emitting LLVM IR. <- also mentioned in the MLIR paper.

For example, Clang will use its AST to perform not only static analysis but also transformations, such as C++ template instantiation through AST cloning and rewrite. Finally, languages with construction at a higher level than C/C++ may require non-trivial lowering from their AST to generate LLVM IR.

Consequently, multiple frontends end up reimplementing significant pieces of infrastructure to support the need for these analyses and transformations. MLIR addresses this issue by being designed for extensibility. There are few pre-defined instructions (operations in MLIR terminology) or types.

Like C, Swift, Rust, etc., each language has its own AST optimizers that do some language-specific transformations and analysis. This is quite tedious to do. So:

MLIR is designed to allow all IR elements, such as attributes, operations, and types, to be customized. At the same time, IR elements can always be reduced to the above fundamental concepts. This allows MLIR to parse, represent, and round-trip** IR for any operation.**

This is EXACTLY what I want to say for the APSys submission.

Through dialects, MLIR allows for the representation of many different levels of abstraction; the Toy dialect that we have previously defined is one such example.

Though these different dialects may represent different abstractions, there is often a set of common transformations and analyses that we would like to perform.

The blog builds the Toy Example following these steps:

Say I want to build some P4 or FPGA stuff using MLIR, I would do:

I’m not exactly sure what IREE is doing. Overall, it takes an ML program and tries to transform it into scheduling and computation modules run on various hardware components. 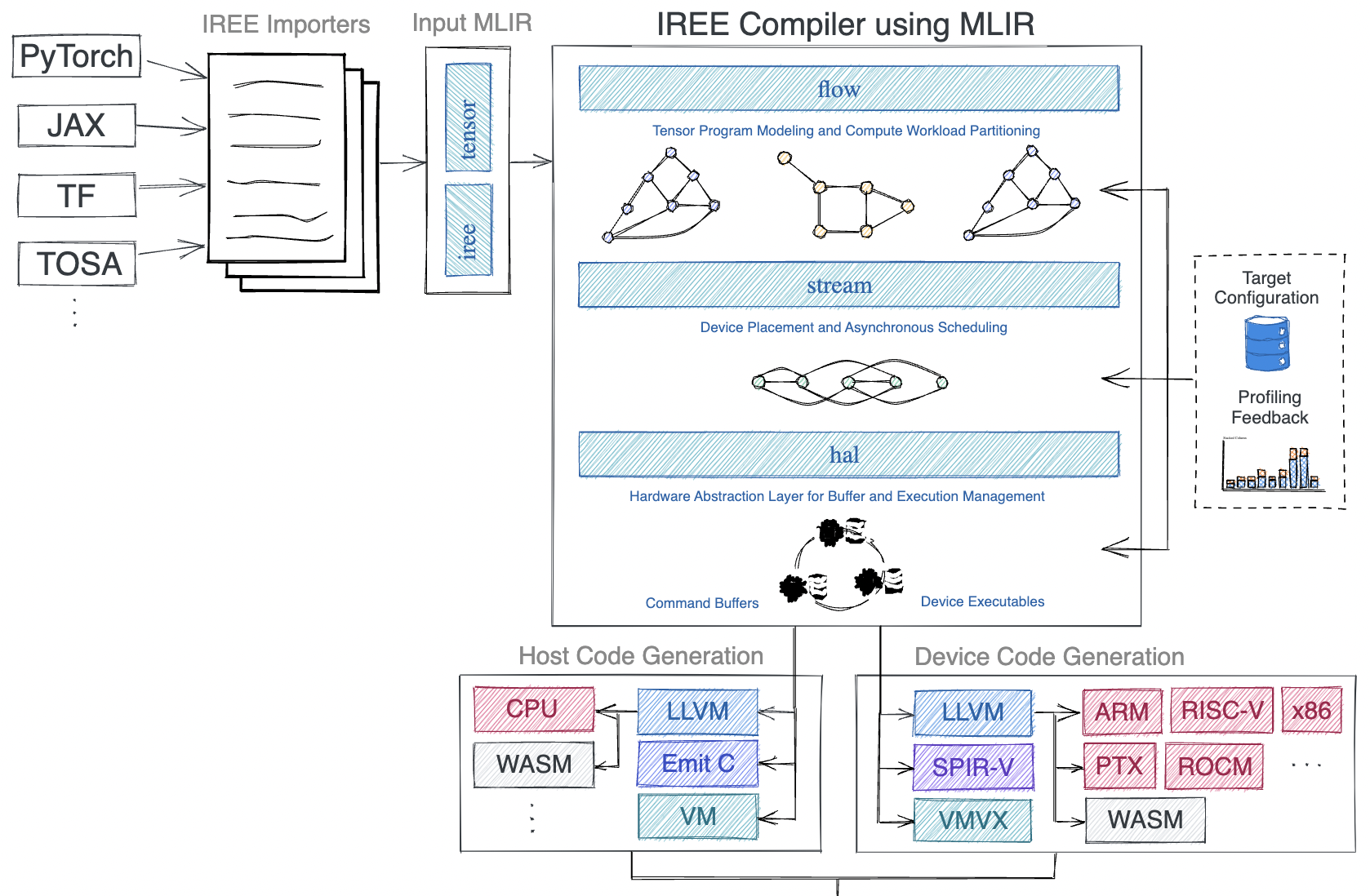 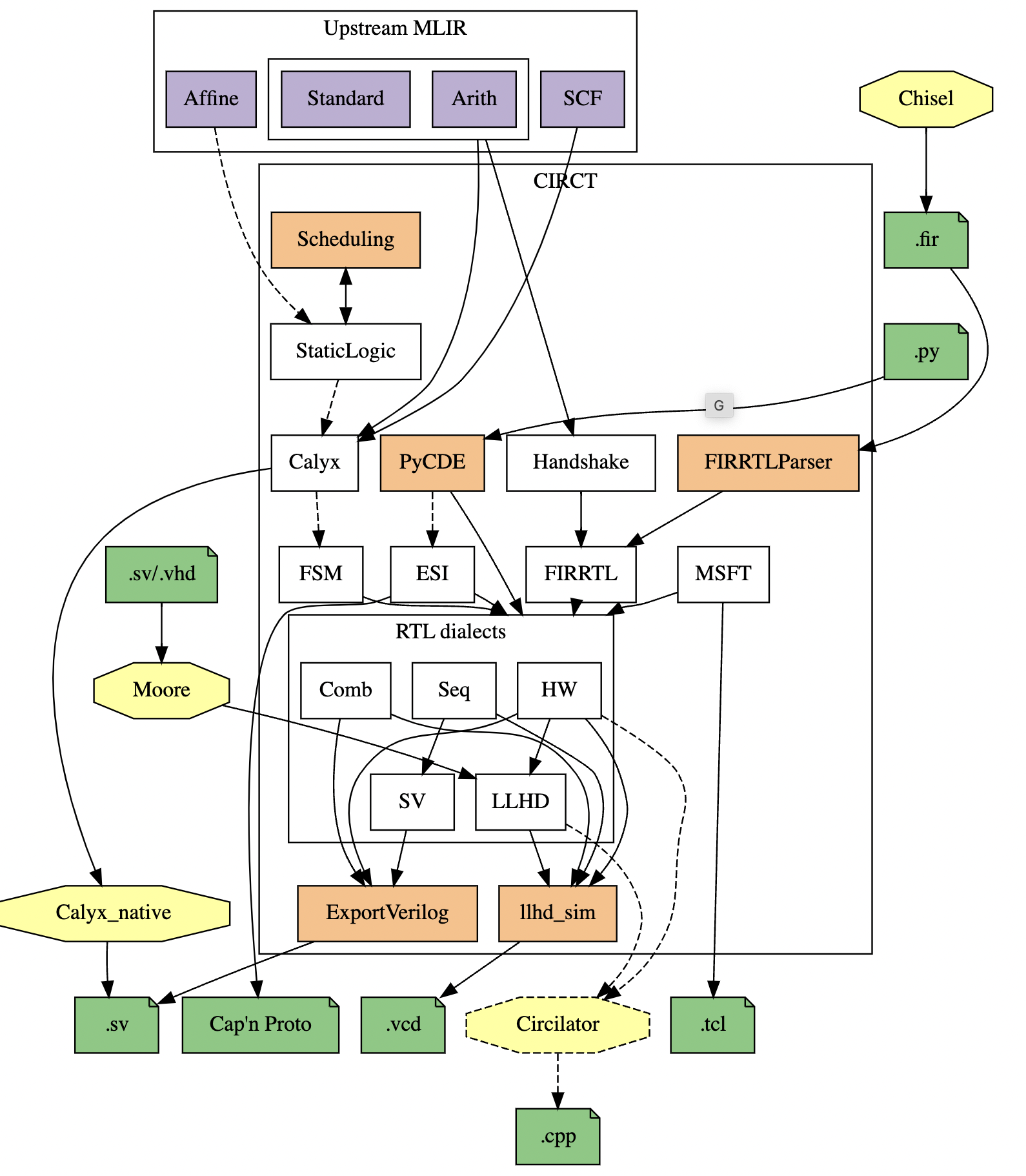 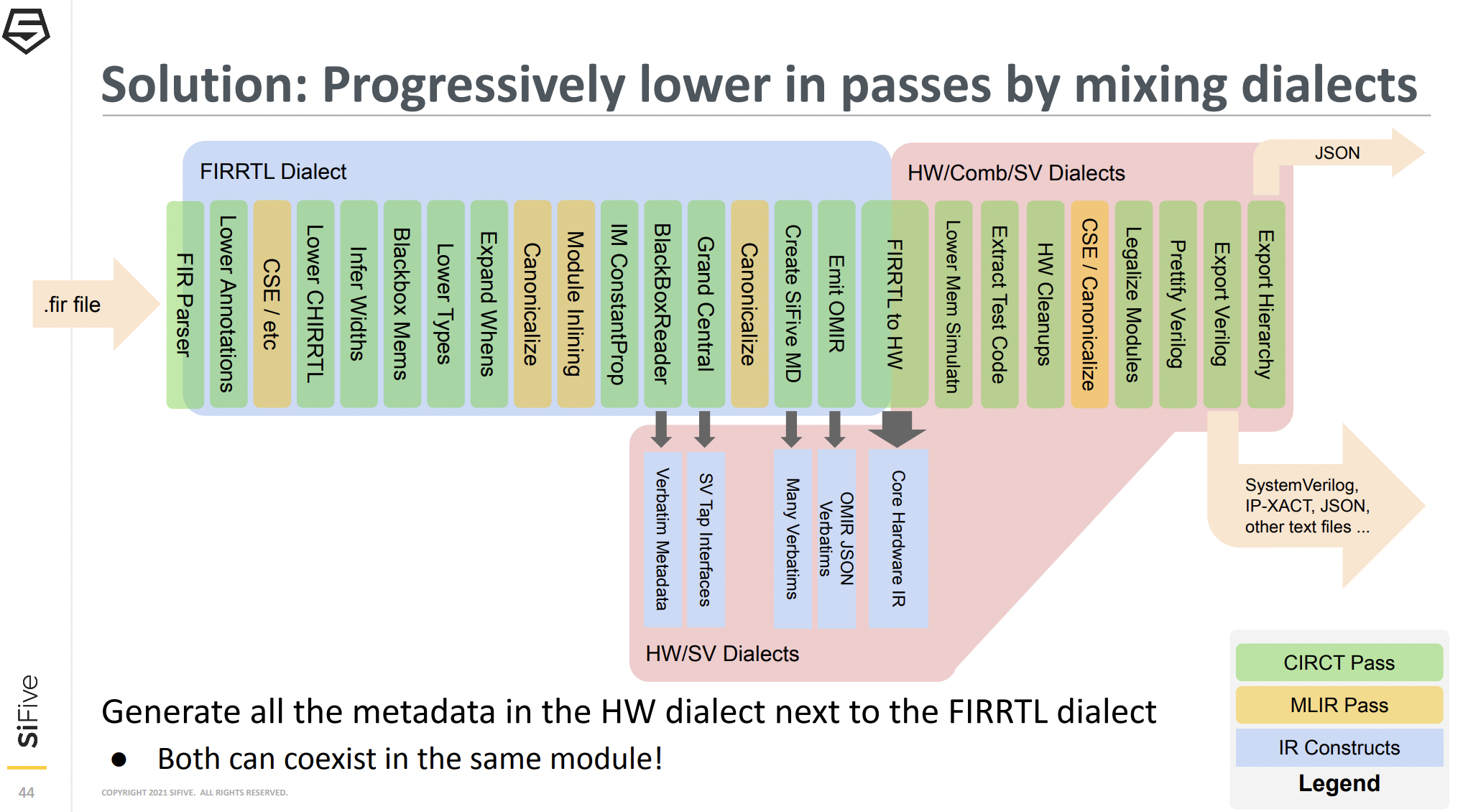 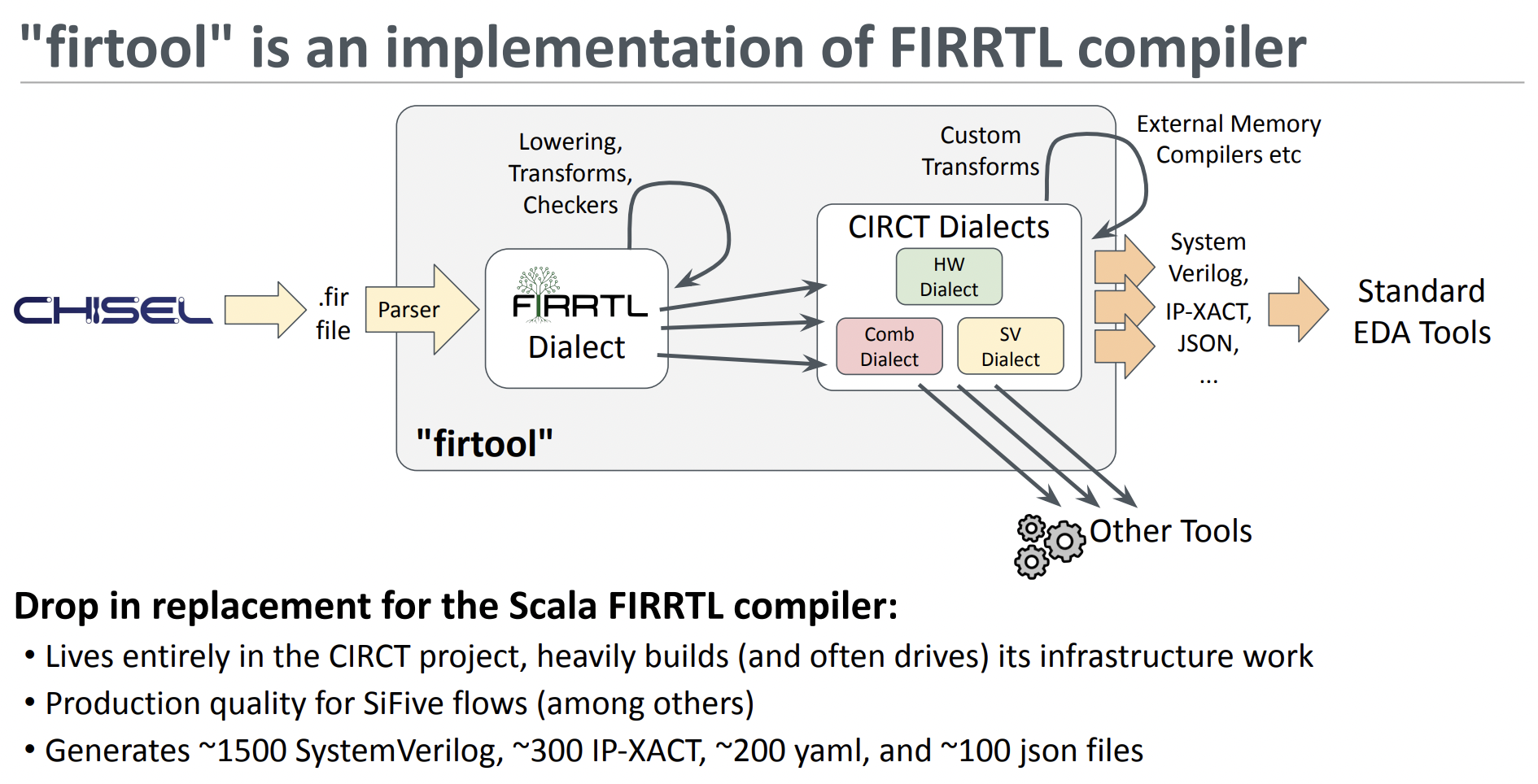 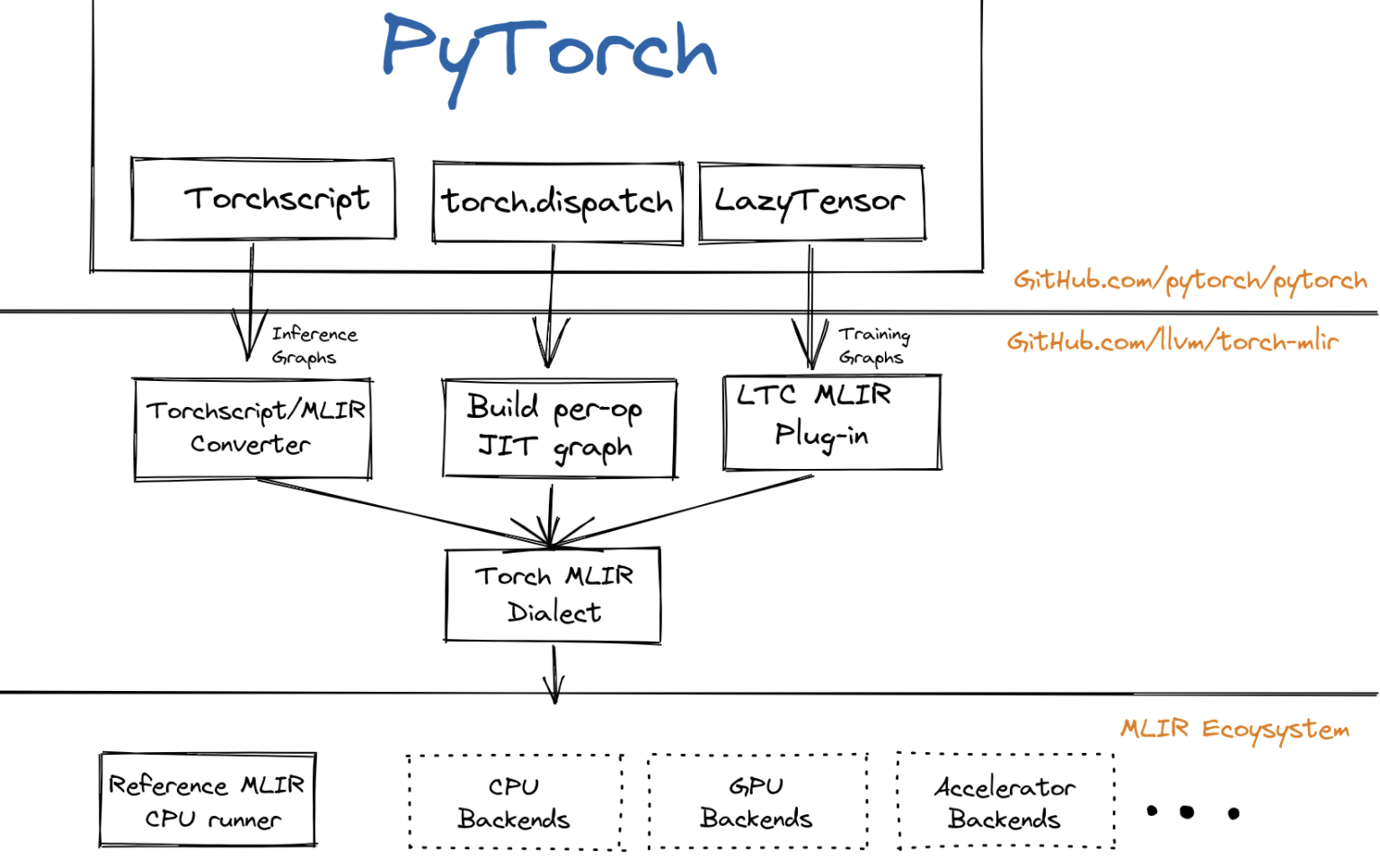 It is a very interesting read. The following image shows its workflow. 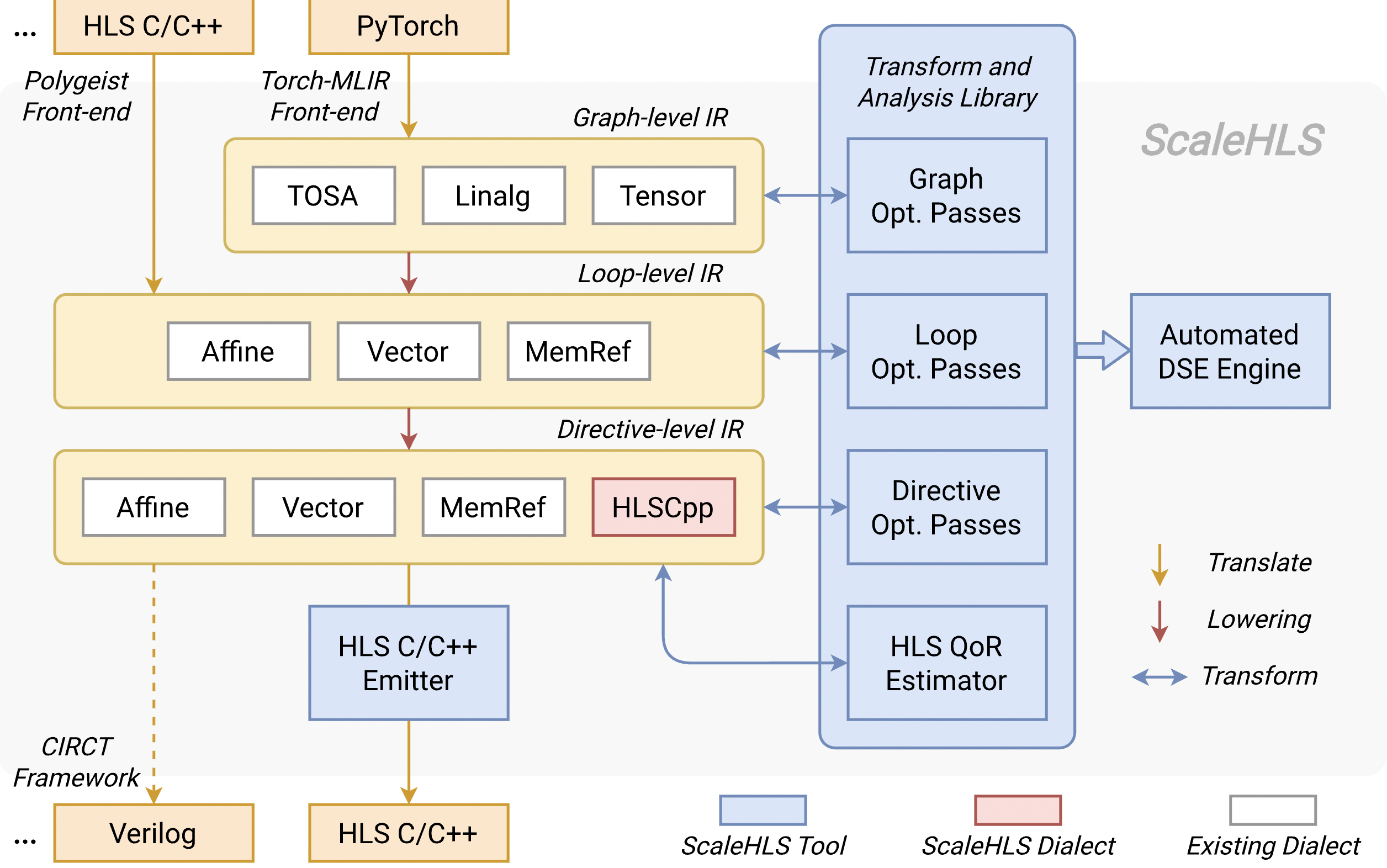 My thought: I think we will continue seeing more MLIR-based solutions to help DSA development. It’ll be interesting to see some higher-level, or higher-order primitives constructed in MLIR to help, say, FPGA-based SQL develpoment (or rather, any types of FPGA-based computations). In general, MLIR helps to raise the abstrantion, hence we are able to raise the programmability futher.

The paper is Pathways: Asynchronous Distributed Dataflow For ML, arXiv‘22

“Sec 4.2: The client then constructs a device location-agnostic PATHWAYS intermediate representation (IR) for the program, expressed as a custom MLIR (Lattner et al., 2021) dialect. The IR is progressively “lowered” via a series of standard compiler passes, which eventually output a low-level representation that includes the physical device locations. This low-level program takes into account the network connectivity between physical devices and includes operations to transfer outputs from a source computation shard to the locations of its destination shards, including scatter and gather operations when a data exchange is required.”

Alpa, arXiv‘21 proposes a set of methods to partition an ML training process to best utilize pipeline, data, model parallelism. This seems to be the first one doing all 3 at once. There are, of course, similar papers in the past doing 2 out of 3 (a paper from the Stanford folks).